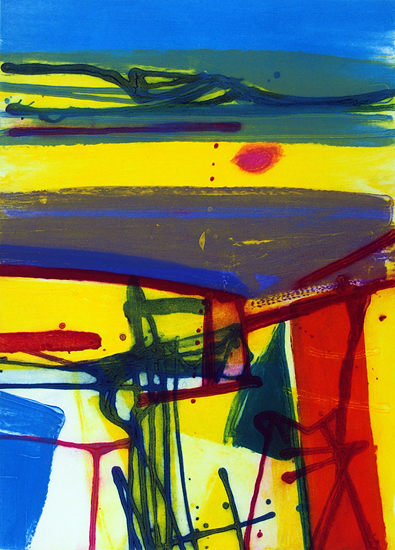 
Marian Leven
Marian Leven was born in fife and studied at Gray’s School of Art, Aberdeen. Since then she has had over forty successful exhibitions, and awards include first prize in 1997 for the prestigious Noble Grossart/Scotland on Sunday Painting Prize. Scottish landscapes and changeable weather inform Leven’s work; her earlier expressionist paintings have given way to new abstract works evoking a sense of space and time. “My painting allows me to respond to this environment in the knowledge that I am part of a long history of people shaped by these conditions.”

Hughie O'Donoghue born 1953 in Manchester. His method is derived from a knowledge and understanding of the methods of both abstract and figurative painters of the past which he attempts to synthesise in his own work. This respect for the historic methods of making art has led to O'Donoghue being praised not only for his painting skills, but also his emphasis on the importance of draughtsmanship in the making of a painting. He was elected Royal Academician in 2009.

Born in Falkirk, Scotland (1943) Barbara Rae lives and works in Edinburgh. Through the varied use of bold composition, strong contrast and richly textured painted and collaged surfaces she evokes a memorable atmosphere in all of her work. Rae was elected President of the Society of Scottish Artists in 1983. She was made a Member of the Royal Scottish Academy in 1992 (ARSA 1980) and a Royal Academician in 1996.

Drawing is at the heart of Emma’s practice and she has travelled widely, recording her responses to the physical appearance and psychological impact of natural and built environments. Working from sketches and photographic records, Emma creates stark, monochrome, often large-scale works on paper. She has works in public and private collections, including the Victoria and Albert Museum, Scott Polar Research Institute, the University of Cambridge and the Stadtmuseum, Berlin. She was elected a Royal Academician in 2013