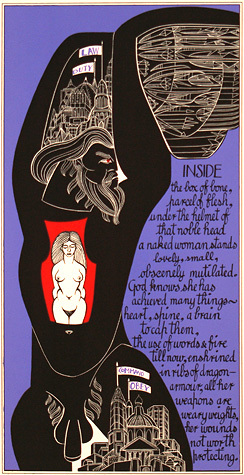 
Alasdair Gray's prolific production of distinctive and original works of art and writing makes him one of the most influential and admired creative polymaths of recent times.

Better known as a novelist, but also a muralist, playwright, printmaker and illustrator, Gray's work includes the frontispieces for his own Lanark. Alasdair Gray's best-known productions as a visual artist are his graphic illustrations for his own books, and he is interested in a tradition of writers who have also illustrated their own work, including William Blake and Rudyard Kipling.

In 2008 Gray completed a series of works that were developed from earlier drawings conceived in the 1970s. The works where developed as screenprints and exhibited at Glasgow Print Studio alongside 2007's The Scot's Hippo series and the renowned Lanark series in October 2008.