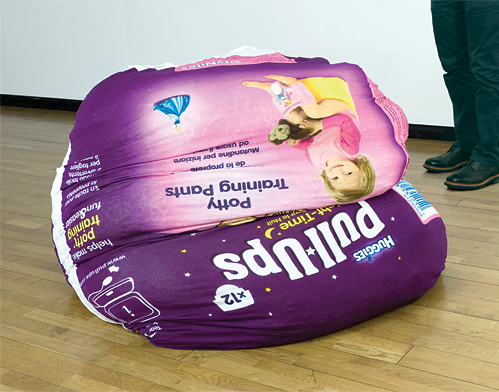 Reproduction investigates themes of multiplicity, uniqueness and reproduction. This new work is based on the playful use of references, processes and materials dually referencing the nature of print and the recent baby boom.

From his position as a childless male artist, Alex Frost has analysed the points of intersection between image reproduction and human/social reproduction. The resultant artworks respond to both their immediate context of an exhibition within a specialist print studio complex and the social context of recently increasing birthrates in Britain.  This continues on from previous works that address the particularities of the site - its location, it's former use or its role within a community. He is not working from a critical distance but from a more conflicted position.

Glasgow International is a world-renowned biennial festival of contemporary art. Animating the city from 4th – 21st April 2014, Glasgow International showcases the best of local and international art for wide-ranging audiences. It returns for its sixth edition, under the guidance of new Director, Sarah McCrory.

The festival will continue to showcase Glasgow as a unique major centre for the production and display of contemporary visual art. Taking place in various venues and locations across the city, including Glasgow’s major art spaces and cultural institutions, the Festival will be comprised of an ambitious programme which includes exhibitions, events, talks, performances and projects by international and Glasgow-based artists.

Born in London, Alex Frost lives and works in Glasgow, Scotland. His most recent solo exhibitions include: Self-Defence and Other Hobbies, 2013, The Park Gallery, Falkirk; Future Spotters (Kassel, 1987 & Münster, 2013), 2013, at Wewerka Pavilion, Münster, Germany; The Old & New Easterhouse Mosaic (& everything in between), 2012, at Platform, Glasgow and The Connoisseurs, 2010, at Dundee Contemporary Arts, Dundee.

Amongst his forthcoming projects are a major public commission The Patrons for Generation, 2014 at Cove Park. He is also currently showing work as part of the group-exhibition Reclaimed: The Second Life of Sculpture (also part of Glasgow International 2014) at The Briggait.