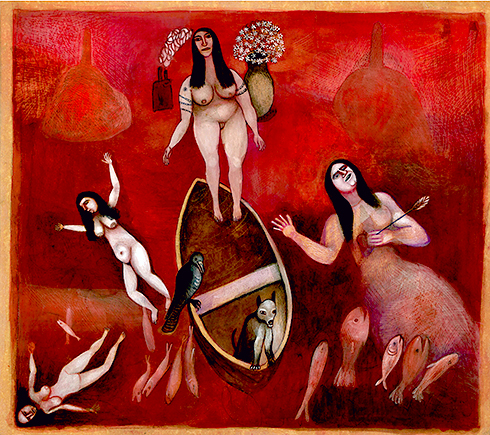 
Works include a new series of soft ground etchings produced at Glasgow Print Studio that feature imagery distilled from McVeigh's imagined pantheon of allegorical characters and creatures. His paintings and prints often depict everyday life in Scotland, but when infused with his own personal perceptions, take on a dreamlike reverie, and are redolent with the light and shade of poetic imagery. The recurring theme of a woman (or women) in a boat features in several of these new works that contrast sadness and gaiety in equal measure.

McVeigh lives and works in Edinburgh and echoes of the city's closes, street life and festivals with all its subcultures and traditions can be seen in his work alongside East Coast harbour scenes and pubs, fisherfolk and folk musicians.

Born in Dundee, McVeigh studied at Duncan of Jordanstone College of Art and Design from 1977-82. He has exhibited widely over the past three decades with solo shows including Edinburgh Printmakers, Compass Gallery, Open Eye Gallery and many group exhibitions including Scottish Gallery and Highland Printmakers.