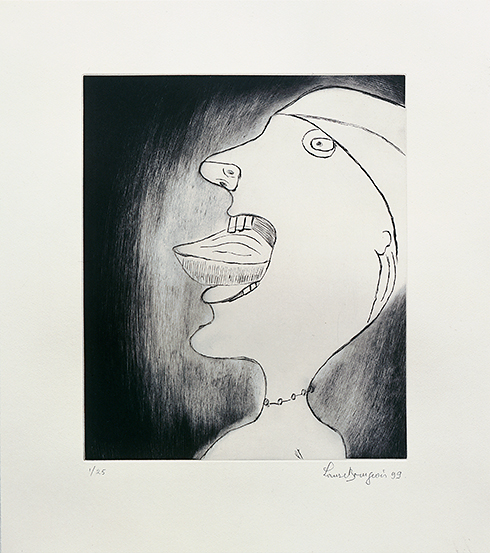 Glasgow Print Studio is delighted to host a Hayward Touring exhibition by one of the most important and influential artists of the late twentieth century. Louise Bourgeois (1911 - 2010) is best-known for her powerful emotionally charged works exploring the unconscious, desire and the body. The exhibition comprises of Bourgeois’ Autobiographical Series and a set of 11 drypoints. Created towards the end of her seven decade career, these deeply personal prints capture some of the artist’s deepest thoughts, memories and anxieties.

Autobiographical Series (1994) captures some of her deepest thoughts and memories, whilst the set of 11 drypoints (all from 1999) brings these anxieties into more abstract territory. Featuring familiar motifs, from the pregnant woman to the cat, the prints in these two series are clearly inspired by her obsessions with the human condition. Womb-like figures, stairs and ladders, feet, long hair, clocks, scissors, bathtubs and a pregnant mosquito all contain charged references to memory, with such titles as ‘Empty Nest’, ‘Paternity’, ‘Please Hang in There’ and ‘Mother and Child’. The print entitled ‘Fear’, as part of 11 drypoints, for example, shows a person crouched inside a triangle that is slowly squeezing her into a tight space.  The memory of her mother sewing - the Bourgeois family ran a successful tapestry company - is evoked in ‘Sewing’, in the Autobiographical Series.

Louise Bourgeois began making prints in the 1930s and briefly ran a print shop in Paris before she emigrated to New York in 1938. She lived in Manhattan for the rest of her life. There she worked at S.W. Hayter’s print workshop and later bought a press so that she could work from home while raising her three children. Following her husband’s death in 1973, she taught printmaking at the School of Visual Arts.

Bourgeois enjoyed the sculptural, tactile and physical process of printmaking. This medium gave her the ability to make many changes over the course of an edition, experimenting with the depth of transparency with certain elements of her drawings, which typically resulted in a number of different states until she was satisfied. The possibilities of retaining parts of her original drawings whilst amending others was something that she felt was not available to her in painting or sculpture. She said of printmaking that ‘the whole history of the creative process is there’. After many years of focusing primarily on sculpture, Bourgeois turned back to printmaking in the 1980s and continued to produce prints until her death in 2010. The two collections of works in this exhibition were made when she was in her eighties, after installing a small press in her own home.

Since she was honoured with a retrospective at the Museum of Modern Art, New York, in 1982, Louise Bourgeois has been widely acclaimed as one of the most original artists of the late twentieth century and has exhibited at museums throughout the world, including at Tate Modern in 2007.