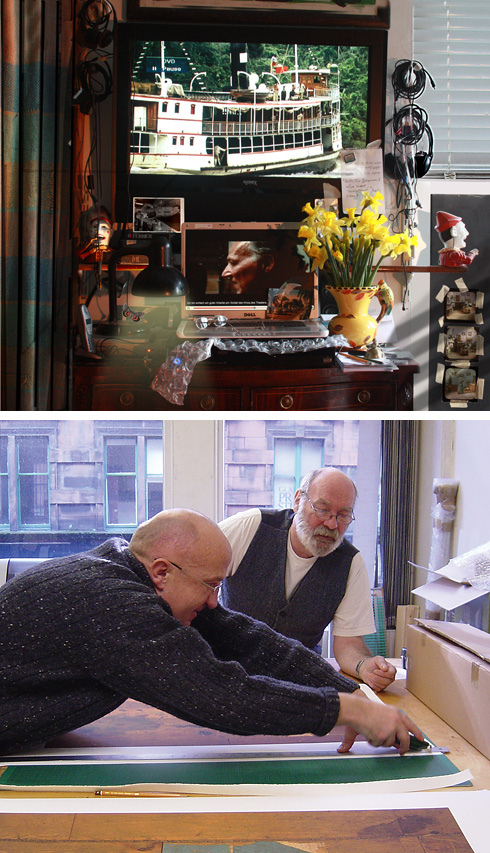 When Calum took over, that was what really established the ethos of the Print Studio...it announced that printmaking was something to be valued and aspired to...it was really about flying the flag for printmaking as an innovative, authentic and valuable medium in its own right.

Calum Mackenzie joined Glasgow Print Studio as Director in 1975 and led the organisation until 1983. Under his ambitious leadership the organisation flourished, moving from a West End flat to large premises on Ingram Street. Prestigious and popular exhibitions included Mark Gertler, Max Ernst, L.S. Lowry and the Scottish Cartoonists exhibition.

At Ingram Street, Calum established the Print Studio Press, giving writers such as Alasdair Gray and Liz Lochhead their first opportunity to have a book published. He also presided over many inventive fundraising events, such as the first ‘Loveliest Night of the Year’, the legendary annual Midsummer’s Ball. Anyone who worked with Calum would agree that it was his imagination and gregarious personality that really helped to ‘make things happen’. As Jimmy Cosgrove describes it,

“The attraction was Calum – one can never underestimate Calum's enthusiasm, knowledge and sense of place. “

In recent years, Calum began to use the Print Studio again to produce his own digital prints. His work was exhibited regularly at Glasgow Print Studio as well as being shown at the Royal Scottish Academy in 2010 to great acclaim.