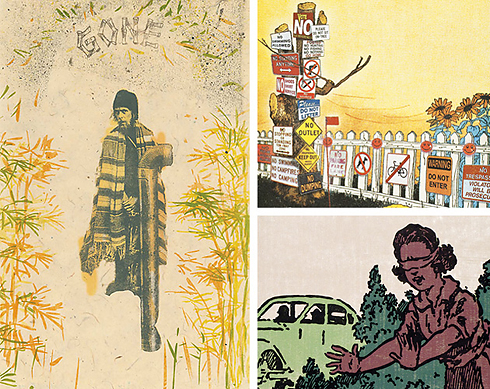 
American imagery has long been a presence in our own culture, not least through the printed image. With this exhibition GPS introduces three American artists to Scotland who themselves scrutinise American printed imagery and re-present it to us with a new and critical awareness. Randy Bolton explores images that seem familiar and comforting on first glance, borrowed as they are from early children’s text books. Digitally altered, the fragments of these old illustrations suggest new meanings at odds with their original educational intentions. Michael Krueger spent his childhood years in Sioux Falls, South Dakota. It is a historic place and a sense of the history of the pioneering West inspires him. Objects shape Michael’s perception of history and his social and political view of the world shapes his creative practice. John Schulz combines woodcut with digital images to reproduce and transform common images. Images that were banal become disquieting and wryly humorous, conveying a sense of nostalgia that goes with our uncertainty about contemporary life.