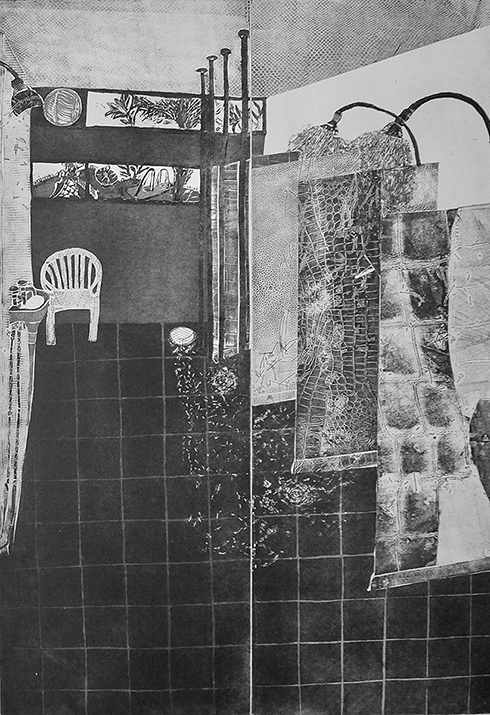 
Fouzia Zafar's work shown here is based on the Arlington Baths Club in the Woodlands area of Glasgow. Founded in 1870 it is the oldest Victorian baths of its kind in Europe. As a child, Fouzia was born just around the corner from the Baths and it remained an inaccessible curiosity throughout her childhood. Having ‘grown up’, and become a member of the baths she was inspired by the quirkiness of the objects, spaces and histories that lie behind the walls of the Arlington Baths Clubs. Like many of the inhabitants of the city it has provided an oasis from everyday life.

Fouzia describes play as a key concept to describe her work as it encompasses the various dimensions of my practice from materials, methods and processes to the themes that Fouzia often explores: the strangeness of memory, family histories, migration and absence. Play encompasses repeatedly finding, composing and constructing new tools and processes to explore objects’ history, surfaces, and qualities, whilst also constructing new narratives.

Photography and collage are integral intermediate stages to her practice as they allow her to construct and deconstruct domestic and public interiors though shape, pattern and process. Each stage invites the element of chance to enter the practice but also provides the opportunity to both push each medium but also embrace what it offers. Fouzia’s work flickers between reality and fiction and use of pictorial language and processes. Figureless, her images have a presence of someone/ something that is now absent and a playful nostalgic ‘noise unfolds.

Fouzia Zafar is a visual artist working in a diversity of media, including paint, print and video. She is born and based in Glasgow. She completed her MA in Fine Art with distinction at the City and Guilds of London Art School in 2013. Upon graduating she received the Gwen May Student Award, from the Royal Society of Painter-Printmakers, the Curwen Studio Award and was shortlisted for the Clifford Chance Postgraduate Printmaking Award and the Collyer Bristow Award. She was voted Printmakers Printer at Cumbria Printfest 2015 and became a fully elected member of the Royal Society of Painter-Printmakers in 2018. She has exhibited across the UK and abroad including the Royal Scottish Academy and the Royal Academy. Her work is held in private collections, the Victoria and Albert Museum, Ashmolean Museum and Scarborough Gallery.