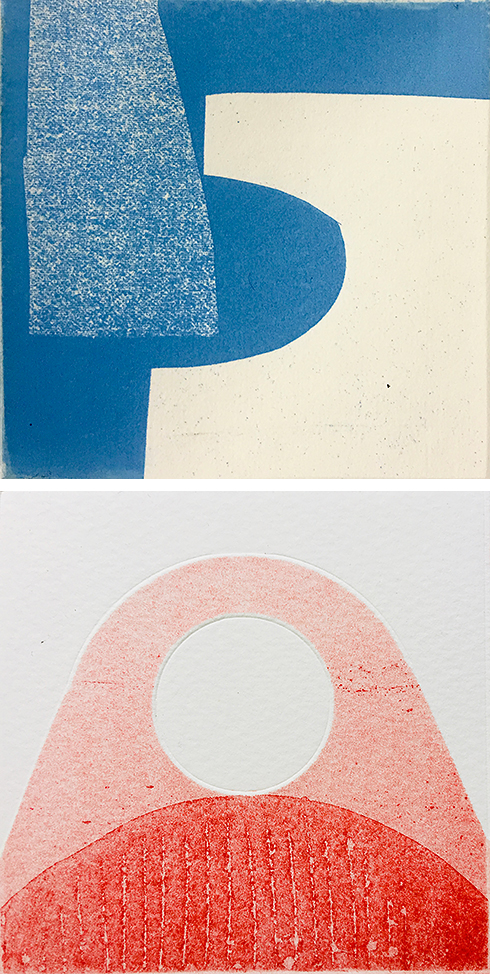 
Sandi Anderson: Taking a Plate for a Walk

Inspired by a Paul Klee quote: “Drawing is taking a line for a walk”, Sandi has made a body of monotypes and monoprints "taking a plate for a walk". Using an 8 centimetre square plate, she has combined, interrupted, masked, inked, wiped and disrespected the plate in as many ways as she can muster. It has been a voyage of discovery and acceptance. Fed by colour and driven by process, when standing at the printing press for this project, she seeks not to control but embrace the outcome, to react and not to plan.

After graduating from Glasgow School of Art in Graphic Design and Photography in 1979, Sandi Anderson had a fulfilling career in film and television. Painting full time began in earnest in 2003 and working figuratively in the landscape took over her practice in 2010. The ‘en plein air’ approach dictated an intuitive response on a small scale, producing a use of tone, colour and simplicity that became signature in her painting.

Sandi has exhibited at the Royal Academy, The Royal Scottish Academy, the Royal Glasgow Institute, the National Open Art Competition in Somerset House, Paisley Arts Institute and at Summerhall in Edinburgh. Her work is held in private collections in the USA, Italy and throughout the UK.

She tentatively began printmaking in 2012 and began working at the print studio more seriously in 2015. Printmaking is currently her primary practice.